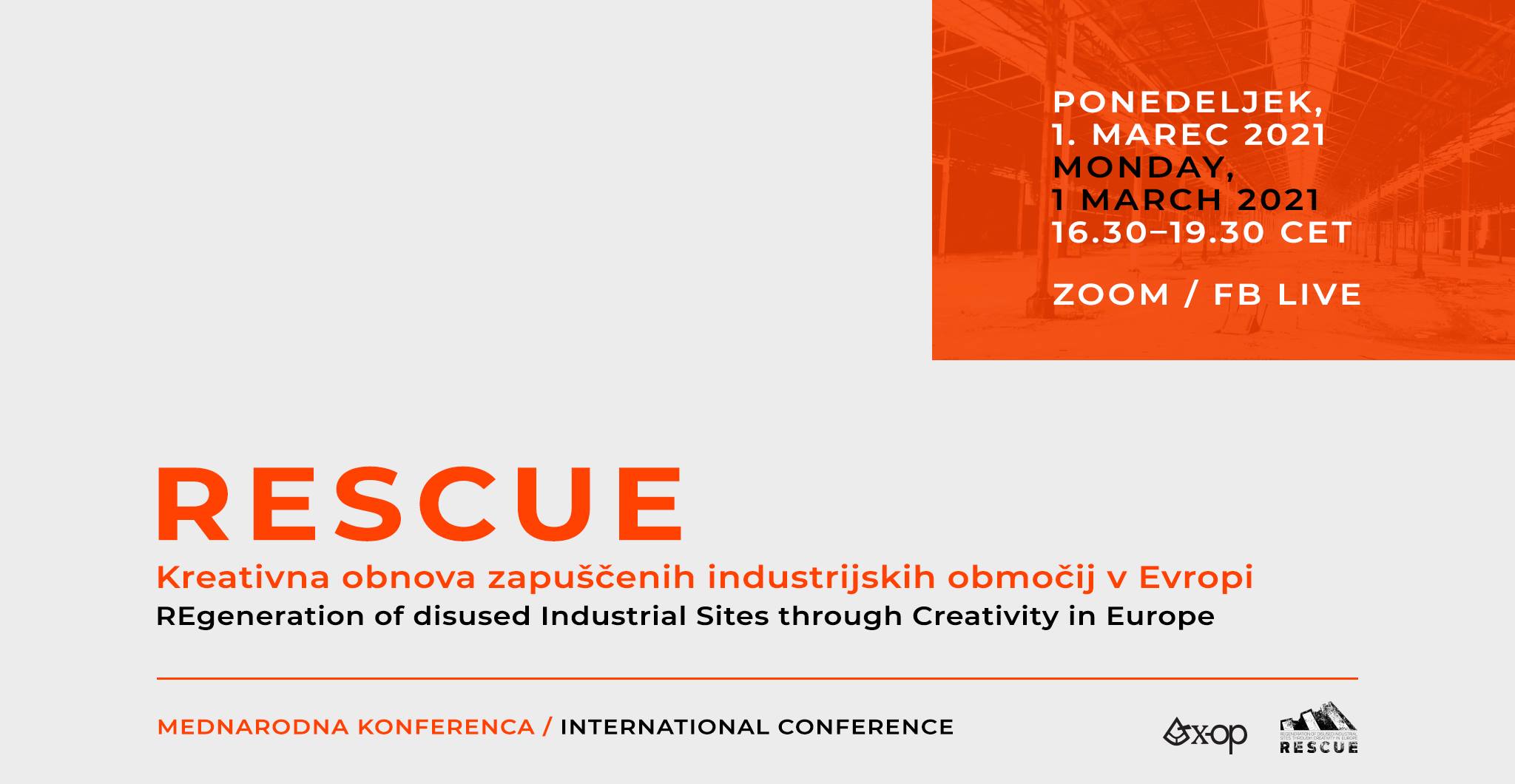 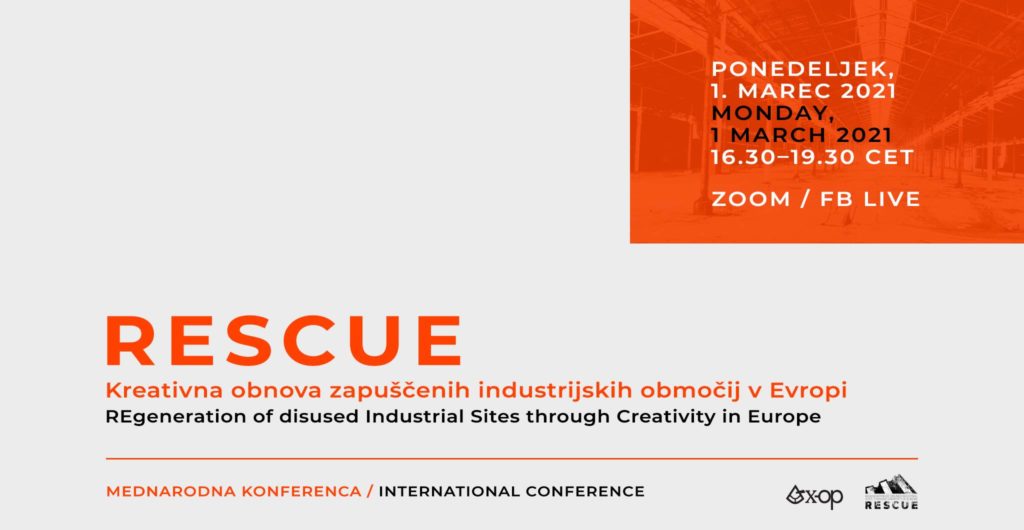 Zahra Mani, composer and curator, Klanghaus
Moderator: Irena Borić
The conference’s primary focus is a diverse set of practices of regeneration of industrial heritage throughout Europe. Industrial heritage refers to sites, structures, building complexes, areas, landscapes, machinery, objects, or documents that provide evidence of past or ongoing industrial processes. As a complex social and cultural legacy, it shapes communities’ lives and influences major shifts in entire societies and all aspects of public and private life. Therefore, the conference seeks to tackle tangible as well as intangible dimensions in the background of industrial heritage, addressing a wide range of issues from disused sites to the history of workers and organization of work.
The conference is realized in the scope of the international project RESCUE (2019–2021), which is dedicated to the regeneration of disused industrial sites through creativity in Europe. As such, it brings together an international group of artists, workers in culture, and architects to unpack their practices tackling urgent issues behind the regeneration of industrial heritage. How to explore the history of abandoned industrial sites with the intention to re-define them as sustainable cultural spaces? Can the complex relationship between history, industrial heritage, people, and socio-cultural developments be reflected in a creative process that will result in a postulation of cultural strategies?

4.40 p.m. Zahra Mani: RESCUE
Zahra Mani, musician, composer and curator from Klanghaus Untergreith in Austria, will introduce RESCUE – Regeneration of disused industrial sites through creativity in Europe. The ongoing »smaller scale cooperation project« co-funded by the Creative Europe program brings together partners from Italy, German, Slovenia and Austria. RESCUE is about industrial heritage, meanings of labour and social transformations of concepts pertaining to work and workspaces. It is also about cultural heritage and outreach. Through artistic approaches, exchange, collaboration, dialogue and innovation, the use or interpretation of industrial spaces becomes a communicative, creative process in society. RESCUE is not necessarily looking for answers, but for feasible approaches to collaborative socio-cultural initiatives that can be realized in and between communities. Following a brief introduction of Klanghaus Untergreith and its focus on contemporary artistic practice and on regionality, Zahra will briefly describe the structure, aims and activities of RESCUE, touching on Covid-conform solutions and looking out beyond the project into an uncertain but necessarily sustainable cultural future.

4.55 p.m. Chiara Bonfiglioli: Textile factories and their industrial heritage in the post-Yugoslav space
The industrial heritage of textile factories with a predominantly female workforce is perhaps less visible than the legacy of male-based heavy industry in the region of South-Eastern Europe. Still, it is a very significant one, given that textile factories were one of the main sites of industrial employment for working-class women during the socialist period, symbolizing women’s emancipation and the modernization of gender relations. The process of deindustrialization and ruination, which affected textile factories and resulted in a devaluation of women’s industrial
employment, has been at the core of various activist and artistic projects that denounce the criminal privatization processes. They are characteristic of the post-socialist period and attempt to emphasize the value of women’s industrial work and textile factories as sites of sociability and belonging. In this talk, Chiara Bonfiglioli will discuss some of these interventions, focusing on Croatia, to highlight younger generations’ attachment to textile industrial heritage in post-Yugoslav states.

5:20 pm Dora Chatzi Rodopolou: Transforming industrial heritage for cultural purposes in an inclusive way
Over the past few decades, our cities have been affected by exponential developments, pressing to reinvent their physical and social historic environment. At the same time, in a climate of prolonged austerity and serious socio-cultural challenges, the demand for more pluralistic and democratic decision-making models of heritage care and management is increasing.
This presentation will discuss the inspiring potential of grassroots industrial heritage reuse practice to reload European cities with new cultural energy in an inclusive and democratic way. The subject will be examined through the critical analysis of two cases of transformed factories into cultural hotspots: The Westergasfabriek in Amsterdam and La Tabacalera in Madrid. The background and the reuse outcome of those examples will be discussed, and it will be linked with their physical, cultural, social, and financial impact. Particular emphasis will be placed on their decision-making models and their redevelopment process, which offer practical lessons of alternative ways to convert and manage industrial heritage, providing guidance and informing future relevant practice.

5:55 p.m. Miha Lovše: Abandoned former Yugoslavian railways watchtower turned into a private (»semi-public«) concert venue
Miha Lovše will present a short history of Tower 3 (orig. Stolp 3), a switch building, which gained new life as a concert space through the renovation and establishment of basic functionality. He will talk about the starting points of such an initiative, which at the same time preserves the industrial heritage and acquires a new recognizable cultural location. In doing so, program and financial independence are guaranteed exclusively on a do-it-yourself basis. Tower 3 (orig. Stolp 3) was entered in the Official Register of National Cultural Heritage in 2017 as the only (still) existing facility of this kind within the Maribor Main Railway Station.

6:20 pm Božena Končić Badurina: If only the factory would honk
Božena Končić Badurina’s artistic research of the industrial heritage of the island of Korčula (2017–2020) was carried out in collaboration with Galerija Miroslav Kraljević (G-MK) based in Zagreb and Grey Area Association based in Korčula. The research’s main focus was on two factories – Jadranka (1892–2006), the so-called Fabrika, a fish processing and canning factory, and Ambalaža (1965–2006), a tin packaging factory in Vela Luka, where women made up 80 % of the workforce. The project included field research and participatory work with the local community, emphasizing inter-generational dialogue between former factory workers and the young generation of locals. The research’s final outcome was the artist’s book If only the factory would honk (orig. Kad bi fabrika trubila) based on a workshop at the primary school in Vela Luka. The book can be regarded as an attempt at the reevaluation of intangible industrial heritage, based on informal oral history and the memory of female workers, and as a new insight into the perception and construction of local identity marked by the industrial past.

6:45 pm Irfan Hošić: Urban and cultural transformation through the practice of total engagement. Case study KRAK.
Center for contemporary culture KRAK, in northwestern Bosnian city Bihać, was established in 2020 as a result of endeavors in the field of critical theory, art/design practice, and civic engagement generated in the last several years around City Gallery and Department of Textile Design at the University of Bihać. It is an independent and autonomous space that emerged due to continued scientific observations and practical implementations. Its conceptual context is framed by post-socialist and post-industrial characteristics – unsuccessful and painful transformation from Yugoslav socialism into post-Yugoslav neoliberal capitalism. The prominent markers of that period are conflicted relations, depopulation, poverty, and trauma.
KRAK focuses on contemporary culture, including visual arts, design, and social theory as a frame for proactive practice. It is imagined as a participative project with different protagonists who use social engagement and urban transformation tools to foster the process of learning, informal education, and cultural exchange. KRAK is about to launch its first program for 2021, where questions of migrations, identity, public space, and visual culture intend to be bespoken and articulated.

The conference is part of the RESCUE (2019–2021) project co-financed by the Creative Europe program of the European Union and Ministry for Public Administration of the Republic of Slovenia.
RESCUE is a smaller scale cooperation project co-funded by the EACEA Creative Europe program. Partners from Italy, Germany, Slovenia and Austria invite artists and students from secondary schools to explore the history of abandoned industrial sites in the participant countries, with a view to re-defining them as sustainable cultural spaces. Local students participate in workshops to re-discover the selected space, its industrial history and its significance for the region and its inhabitants. In an ongoing transnational exchange between the curatorial partners, the project participants communicate with audiences across the RESCUE network. The complex relationship between history, industrial heritage, people and socio-cultural developments is reflected in a creative process that will result in a postulation of cultural strategies that might be useful towards a broader regeneration of disused industrial sites through creativity. Working so closely with students and their surroundings, RESCUE enables ongoing grass-roots cultural exchange between participants and local citizens, who will be invited to participate in the performances, presentations, and exhibitions that the children and artists develop.